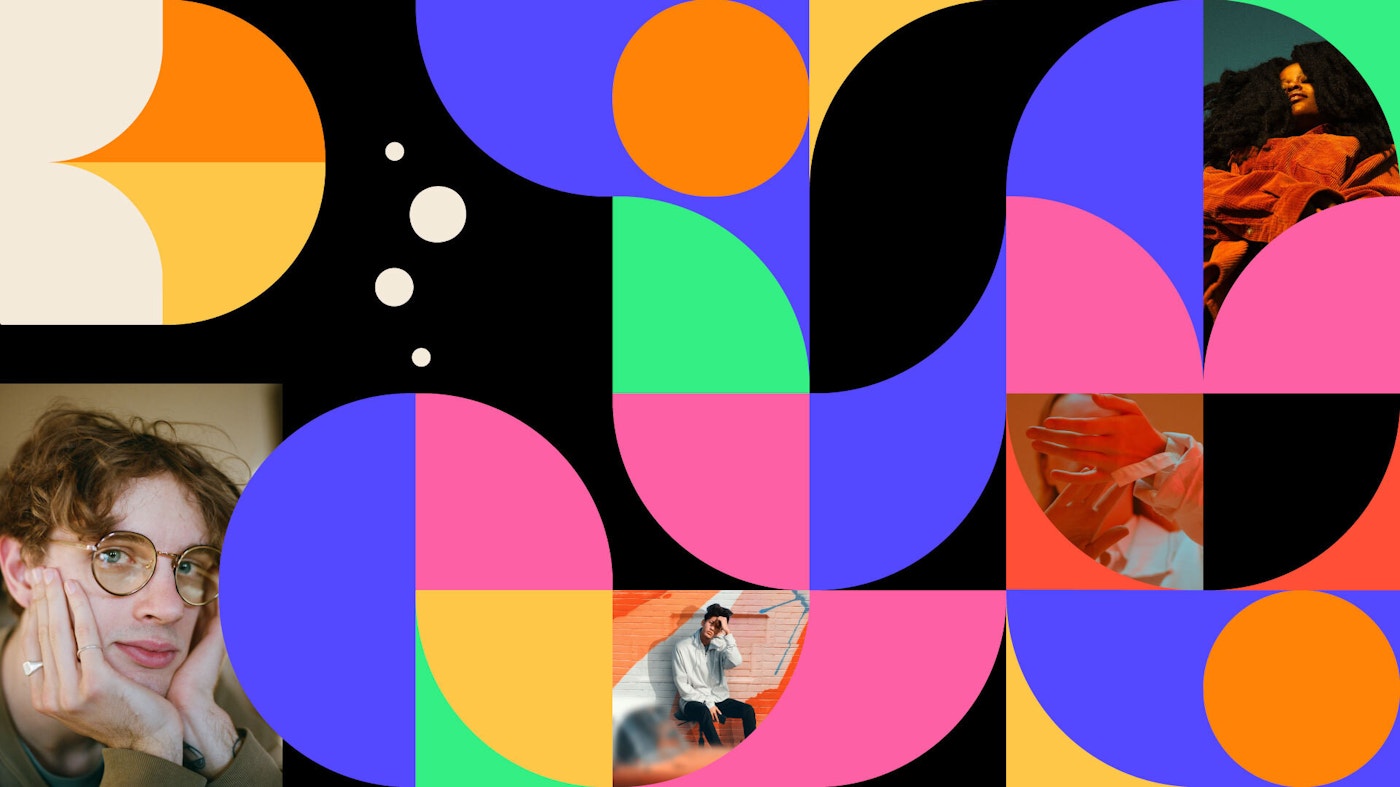 It’s time to trade in sweatpants for sequins! After a year of being couch-bound, consumers are ready to roar like it’s the first 1920s. While Millennial brides are already pinning their perfect flapper dresses, most of Gen Z isn’t practicing the trend as explicitly as TikTok artist Flo Milli’s music video ​“Roaring 20s” but Gen Z is getting their Gatsby on. 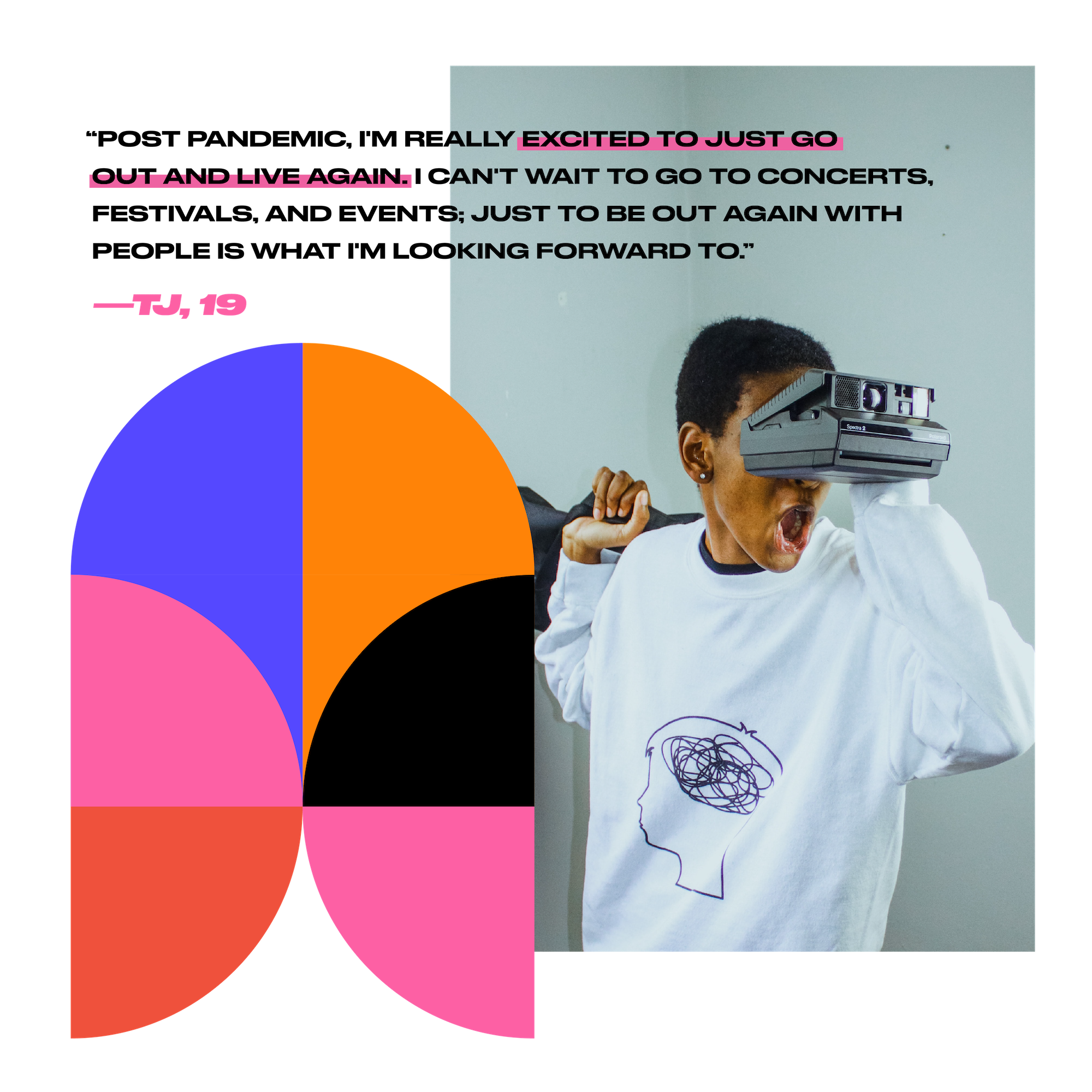 Booze may be delivered by an app these days, but we all just experienced a mega prohibition of the primal sorts. Most of the activities — like, you know, parties, concerts, and touching people who aren’t your parents — have been pretty much off-limits to Gen Z just at the moment most folks usually are pushing their limits.

It’s not that they just missed out on a year of making ​“memories,” Gen Z is coming of age during a period of collective mourning. They are mourning for those who lost their lives during the pandemic, the legacy of inequality, as well as earth’s human-induced trauma. And grieving is naturally a time when we turn to things like sex, humor, and partying that ​“drive the dopamine system in the brain, which gives feelings of optimism, energy, focus, and motivation,” according to Helen Fisher, biological anthropologist at the Kinsey Institute.

Gen Z wants to prove their ​“alive status” as they venture into their own individual and shared fresh starts. Even during lockdown, some Gen Zs took the risk of attending underground parties everywhere from abandoned buildings to TikTok houses. Party locations were found via digital scavenger hunts using a range of social media, augmented reality, and more antiquated party posters. Vybe Together, which started as a TikTok account, eventually evolved into an app, advertised itself as a place to organize underground parties using the tagline ​“Get Your Rebel On.” Underground party reporting even became a genre (and social media shame game) unto itself. As J.J. Abrams told The New York Times, ​“We have a pent-up, desperate need to see each other — to socialize and have communal experiences… screaming together, laughing together, crying together. It’s a social necessity.”

Dance parties weren’t the only thing that went underground during the long lockdown. Many young adults swore their allegiance to life by getting hazy. Over the course of 2020, legal marijuana sales increased 71% and off-premise alcohol sales saw a 24% increase. Fight clubs also popped up at liberal arts colleges — though in this iteration the first rule of fight club was that it would be Snapchatted. Underground sperm donor markets thrived with the help of apps like Modamily and Just a Baby. Though many of the people looking to have a child are Millennials, sperm banks have a long history of collecting seed at fraternities and so many donors were actually Gen Z guys whose motives varied between wanting to ​“give life” and needing to ​“get paid.”

Gen Z may drink far less than other generations, but they also use harder drugs like MDMA, cocaine, and psychedelics far more, according to the The Global Drug Survey. While there are many factors playing into this shift, the biggest driver of this trend is that ​“Class A” drugs are cheaper, better, and easier than ever to buy. For those not of legal drinking age, drugs may be even easier to get than beer. ​“Ten years ago you might have had to phone up a dealer and sort a time to meet,” explains Adam Winstock, Director of the Global Drug Survey. ​“Now you WhatsApp them and get the drugs in 10 to 15 minutes.”

Generation Z’s drug use is also unique in that it’s the first to go viral. TikTok communities dedicated to recording and sharing your drug experience started popping up during the pandemic. Known collectively as DrugsTok, this trend is basically like every other part of TikTok — with its comedy, memes and challenges — but high. There’s SniffTok which is dedicated to all snortable drugs, TripTok for psychedelics, and even the #BenadrylChallenge in which you drink enough of the allergy medicine to trip. While we don’t endorse this drug use, it’s been hard to ignore how big this trend became during lockdown. Case in point: #ket (short for ketamine) and #MDMA were both trending search results on TikTok with 13.8 million and 4.3 million searches respectively. Going forward, we’re hearing that Gen Z is ready to party in person with close friends, new acquaintances and strangers. Ashley, 17, told us that what she really wants to do is ​“make new memories with new people” whether that means going to parties, carnivals or concerts. ​“I want to meet new people there and spend the rest of the day with them,” Ashley said, while also expressing a willingness to go basically anywhere she could meet ​“new people who can stay in my life for as long as they want.”

Post pandemic, I plan on going to as many concerts and as many parties as I can with my friends.

Remix to the Max

The ​“Roar” of the 2020’s aren’t only about sex, drugs, and fight clubs. We’re also seeing this primal hedonistic urge play out in mainstream consumer culture in safer ways. Growing up on the internet, Gen Z is used to pulling references out of their contexts, collapsing categories, remixing eras, and using technology to add their own fresh flair. Now, they are ready to debut their fresh looks outside of their bedrooms with a sense of self-confidence they gained during the pandemic.

Turning to past underground movements, Gen Z is remixing underground fashion from the past and creatively making a moment that’s all their own. Everything from retro Delia’s catalogs to ​‘60s counterculture, Gen Z is embracing a wide range of non-conformist fashions and emphasizing what sets them apart as individuals.

For Gen Z, it’s totally normal that you might don a corset (a nod to Regencycore) over a vintage Cheetos t‑shirt (layering like it’s 2001) and a neon fuzzy bucket hat (a pinch of ​‘90s Club Kid) all at once. They aren’t worried about matching; instead they’re focused on mixing fashion pieces for maximal visual impact in an effort to ​“peacock,” as Gap’s CEO Sonia Syngal put it. 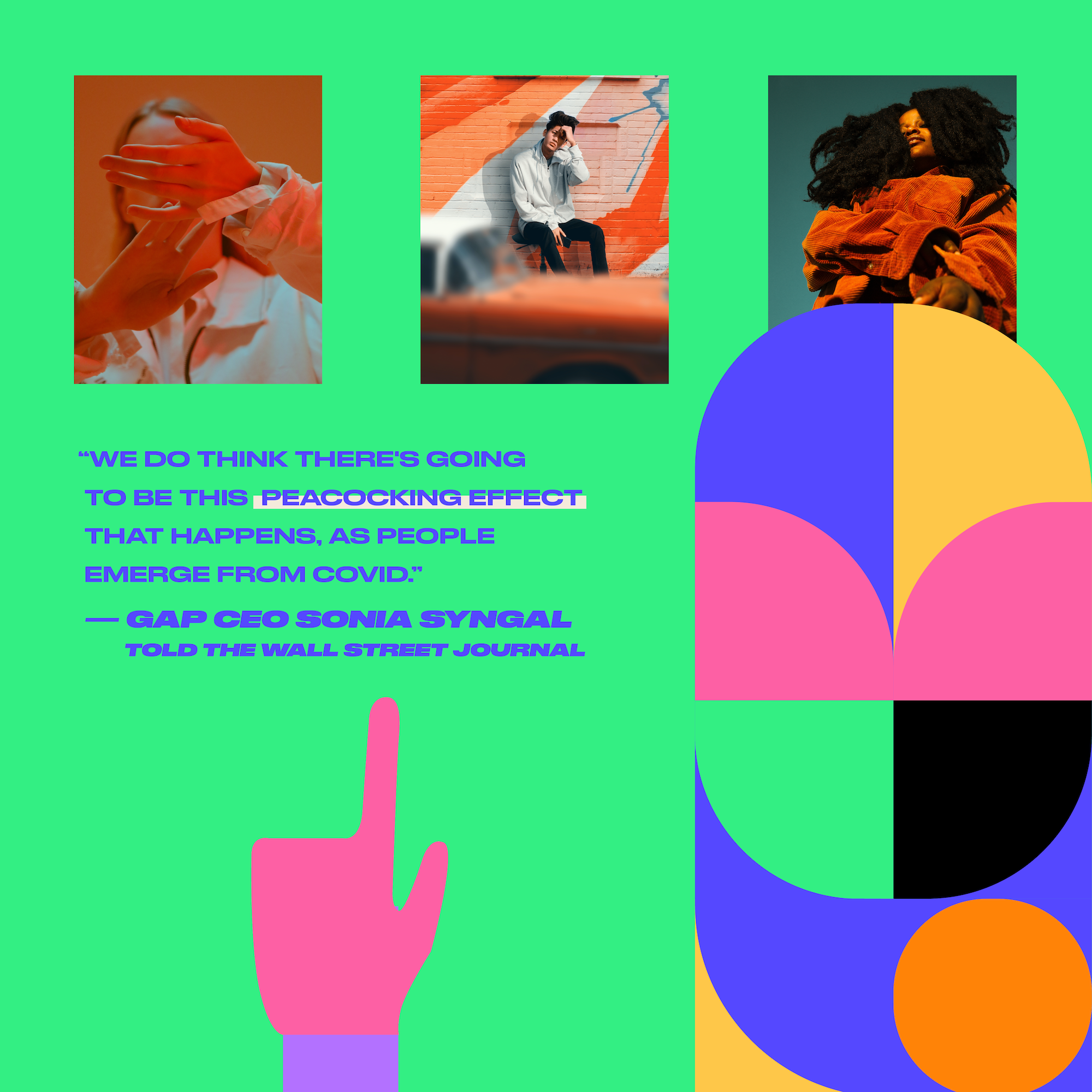 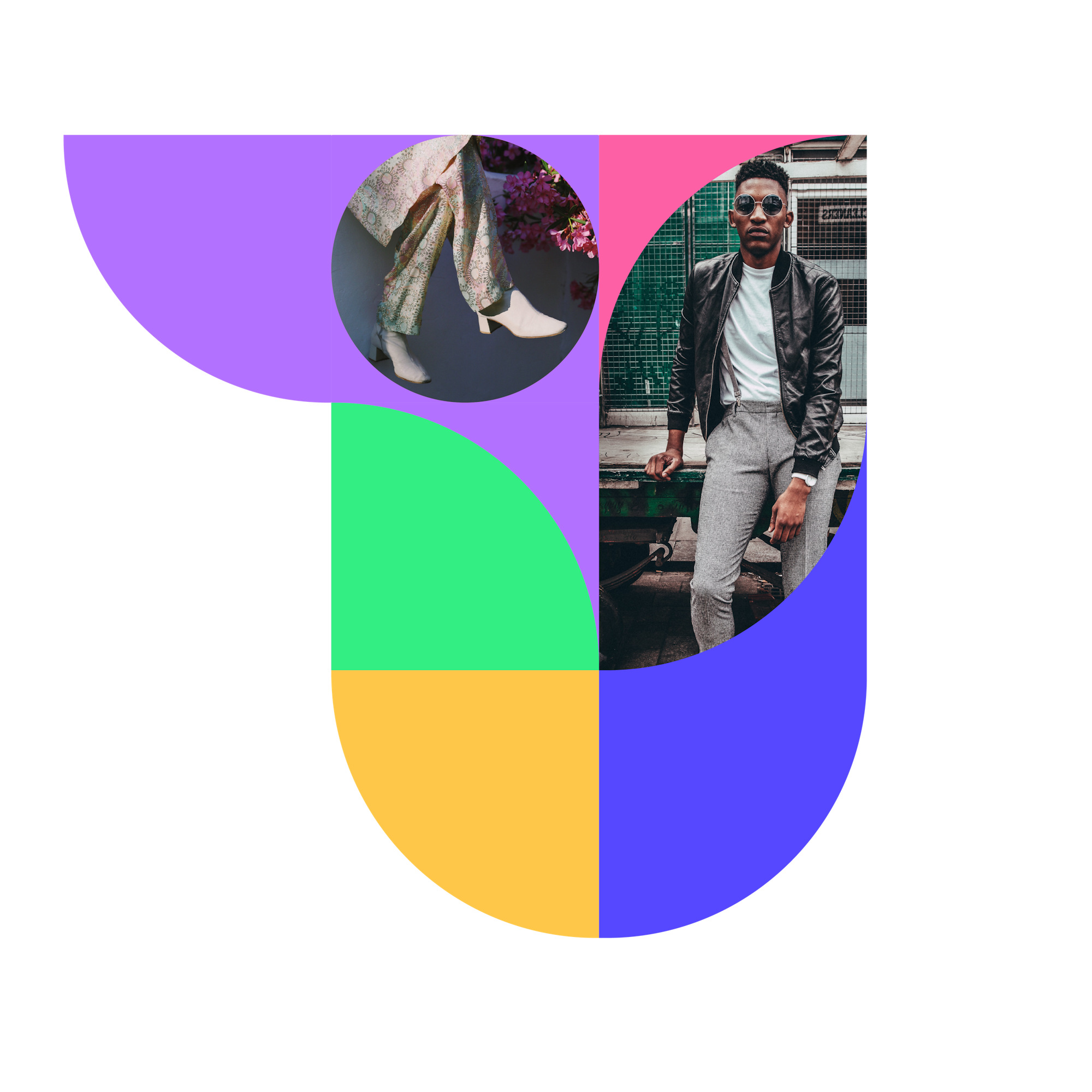 Peacocking isn’t only taking place on TikTok, though many Gen Zs do look for fashion inspiration there. Virtual wardrobes and fantastical backdrops are dissolving retail boundaries and inviting consumers to use their imagination to remix their personal fashion with ease. Virtual fittings are no longer trapped within the confines of consumers’ homes or existing retail, rather they can happen in far-out dream spaces. Generally fashion is waging an all out ​“rebellion against minimal… with an escapist and silly edge,” according to designer and retail strategist Kate Machtiger, founder of Extra Terrestrial Studio.

Gen Z is also taking a maximal-absurdist approach to interior design, combining elements from various eras of teenage dreams. Hypebeasts wait on lines for maximal-gaudy tufted rug drops from trendy carpet makers like Gaudmother. Wiggles, blobs and squiggles are all riding this wave in the form of furniture silhouettes, mirror frames and candles. Inflatable furniture is making a comeback: Urban Outfitters now offers a line of stools that look like oversized Americana food and trippy mushrooms are becoming a core motif for Gen Z décor. And Etsy searches for ​“mushroom lamps” are up 371% while there’s been a 902% increase in searches for ​“mushroom pillows and pillowcases.”

45%
Gen Zs say they like to stand out in a crowd — Facebook IQ Report
28,236%
Percent increase of searches for ​“wavy candles” on Etsy
230x
Gen Z Pinterest searches for ​“Y2K outfit ideas” 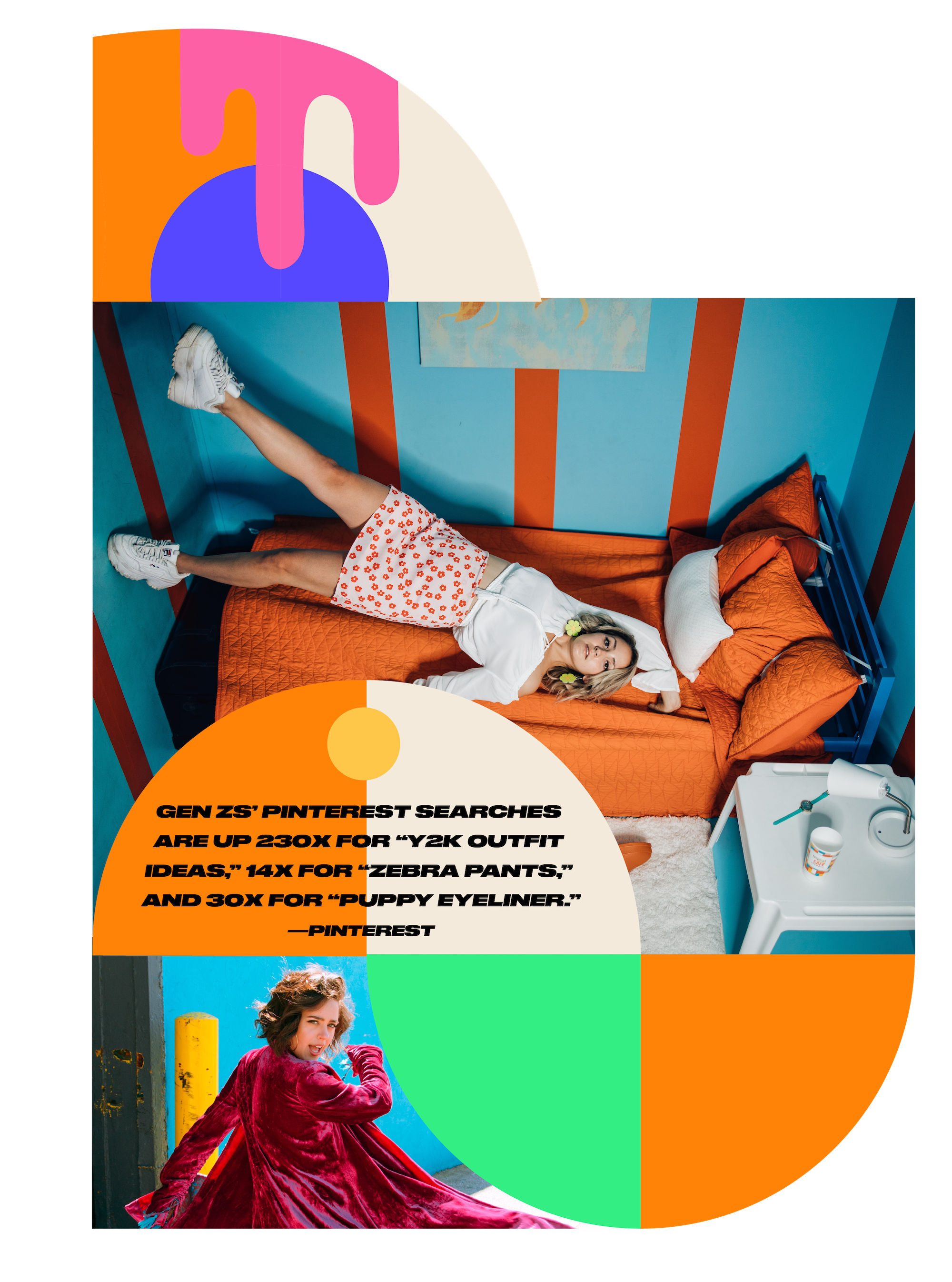 Music is also getting remixed to the max. Hyperpop, a new genre of music, has risen from the underground of Spotify, Soundcloud, and TikTok to become the sound of the 2020s, according to Dazed magazine. Like most music, hyperpop is best understood by listening to it — and that’s especially the case here since it’s sound is created by remixing clashing genres into a postmodern collage of noisy, silly, ugly, and yet totally addictive tracks. Pulling from such disparate references as Skrillex, Mariah Carey, Blink‑182, Nelly, Linkin Park, Missy Elliot, Above & Beyond, Sublime and The Ramones, hyperpop can easily feel like a prank Gen Z is pulling on anyone over the age of thirty.

And even though hyperpop might still be considered a niche genre, it’s already making a big impact outside the roughly 160,000 subscribers to the Spotify Hyperpop playlist. In fact, to commemorate the 10th anniversary of ​“Friday,” Rebecca Black teamed up with hyperpop vanguard Dylan Brady of 100 gecs to create a frenetic hyperpop remix of ​“Friday,” which is so weirdly catchy that we’d be surprised if it didn’t live in your brain rent free after a single listen. Confrontational and bizarre, hyperpop invites Gen Z listeners in by embracing a narrative-driven musicality that is both easy to recreate without expensive equipment and perfect for TikTok storytelling.

Remixing Today for a Better Tomorrow

While fashion has gone maximalist, music has embraced the overwhelm, and interior design is just absurd — these trends are not without purpose. Gen Zs are remaining true to their values and remixing culture to build their vision of a better future. For example, most hyperpop musicians are LGBTQ+, open-sourced, activists for multiple causes, and engage fans as equals. Gen Z fashionistas are achieving the remixed maximalism look by shopping in their closets or thrift stores to avoid waste. Even when Zs dress in head-to-toe vintage, that doesn’t mean they aren’t woke to the historical reality of how terrible it was for anyone ​“different” to live during those time periods. ​“Vintage style, not values” reads period Cosplay influencer Samantha Van Wie’s bio — an attitude shared by most Gen Zs.

In fact, the same creators donning vintage attire frequently mix in challenges to what they consider ​“outdated” values head-on. Meanwhile would-be interior designers are tackling mental health stigmas by making humor, authenticity and happiness central to their aesthetic. All of this may at first glance appear to be nothing more than a new generation’s play, but as Silicon Valley entrepreneur Chris Dixon famously said ​“the next big thing will start out looking like a toy.” So, the future asks are you ready to play in the Roaring 20s Remix? WHAT IT MEANS FOR BRANDS:

Now is not a time to be understated. If the history of pandemic lockdowns, recession and the like tell us anything: Culture is about to explode. Embrace it.

Speak to Zs’ primal side. The coming year is going to be highly emotional as consumers reconnect with their friends — and themselves. Help them navigate all the feels. Provide them with safe spaces and tools for the bad ones, and be a companion for the good ones.

Provide opportunities for consumers to be risqué and push their limits, while still feeling safe. From personal style to brand events and entertainment consumption, Zs will be looking to experience over-the-top options, but realistically may be easily overwhelmed.

Provide Gen Z consumers with tools that enable them to remix key elements of their lives, from fashion to food to purpose and career. Now is the time to mix it up and celebrate the unknowns.