Over the last decade, nearly every major media outlet has rung the death knell for physical stores. After all, why — for the love of Amazon Prime — would you leave your house to shop? But that logic doesn’t apply to Gen Zs, the majority (67%) of whom say they still shop primarily in brick-and-mortar stores.

For them, retail is a search for the sublime. This generation has grown up navigating between two realms, the digital and the physical. They’re accustomed to seeing the world through a tech eye view: streets paved with Pokémon characters, an animé Bambi in the mirror. They travel to Mars via virtual reality headsets, game with friends from around the world, design and 3D print their own toys and test drive products via augmented reality… all without leaving their bedrooms. For them, buying a new pair of kicks is as easy as hollering, ​“Hey Alexa!”

We’re not saying that Zs aren’t going online to comparison shop or make convenience purchases… but let’s be real, most e‑commerce experiences are pretty banal. Physical stores, on the other hand, offer the opportunity for something much more transcendental: a place that challenges, inspires, educates, builds community — and even stimulates personal growth. 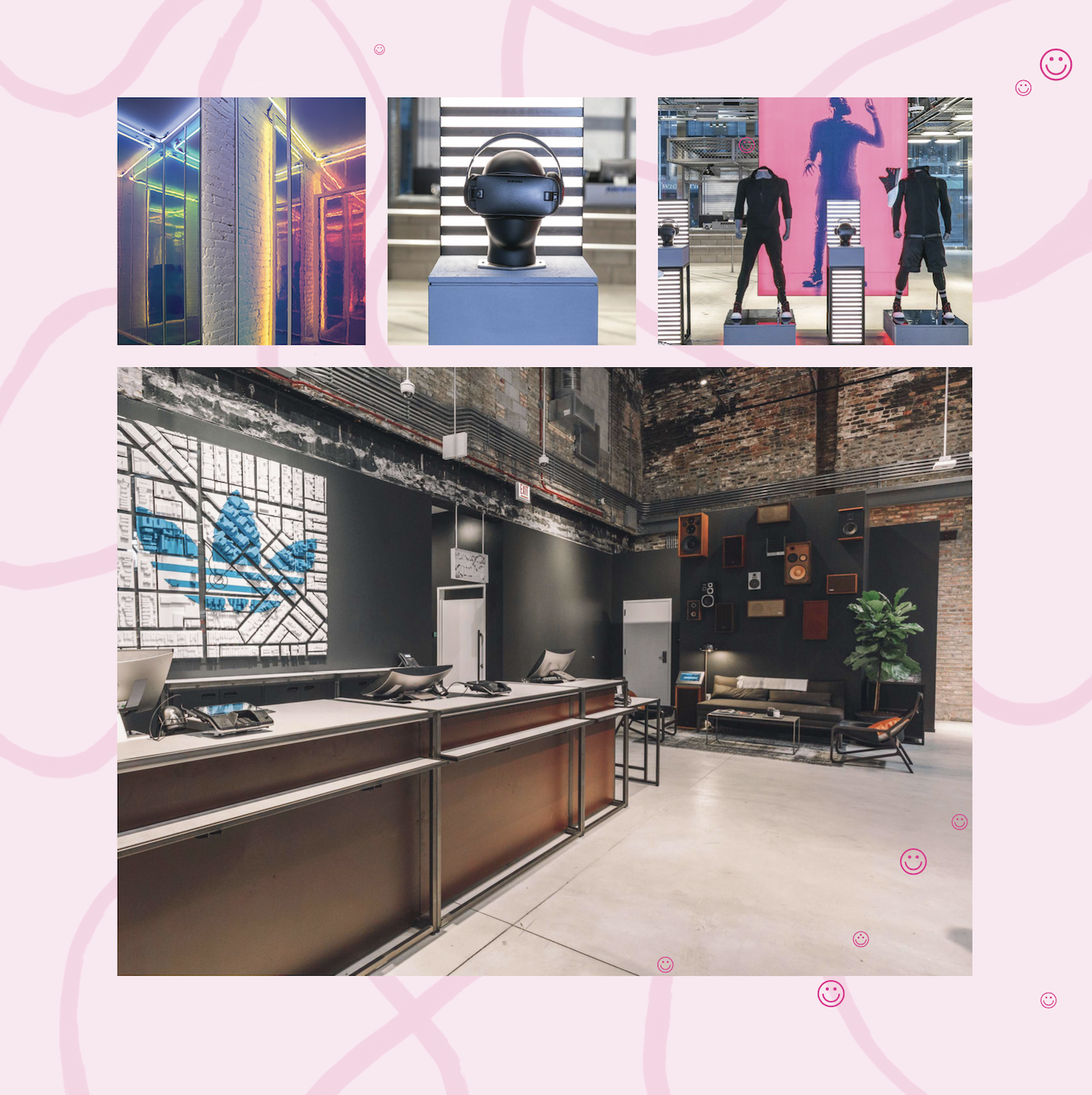 While Gen Xers seem to be marveling over Amazon Go concept stores (which tout automatic checkouts allowing shoppers to pocket products and walk right out), Zs see the future of retail as far more radical. They’re coming of age in an era where social media has standardized the experience economy. A quick scroll through Instagram and it looks like everyone is engaging in larger-than-life experiences all the time, from climbing Machu Pichu to partying at Coachella to cartwheeling in front of Ugo Rondinone’s ​“Seven Magic Mountains.” Retailers no longer compete against opposing storefronts and category rivals, but against remarkable — or at the very least remarkably photogenic — global adventures. If experiential retail 1.0 was a product showroom with iPads-to-purchase, retail 2.0 is a Katy Perry concert, a Costa Rican yoga retreat, and a hit of acid… all at once.

This new reality could send retailers into existential crisis, or it could provide a chance to freely say ​“fuck it” to the sale. Forget the 3‑for-1-black-cyber-blue-light-markdownapalooza psychology. If Zs no longer need a store, what can your physical space be? A classroom? A social center? A dance hall? A meditation space? Or an amalgamation of all of the above?

Retailers are starting to delve into just what these transcendental spaces can offer. Samsung 837 is a 55,000-square-foot space in NYC that touts itself as a ​“Cultural Destination and Digital Playground.” The ​“store” doesn’t sell a single product, but stadium seating facing massive jumbotron screens create a cavernous space for live events and tech-based art installations.

Meanwhile, online luxury consignment brand The RealReal has spent the last year prototyping its ​“community center” retail concept, which will offer regular clinics with experts, from watch gurus to fashion historians. And London-based retailer Match​es​Fash​ion​.com refuses to call any of its three locations ​“stores.” Its soon-to-be-opened headquarters will host classes, panel discussions and events — and be the brand’s full-on broadcasting and content hub. All happenings will be streamed on Facebook Live, YouTube and more. Or take adidas original’s new flagship in Wicker Park, Chicago, which serves as part rotating sneaker collab hub, part home to local artists POSE and TUBSZ, part rotating art gallery curated by nonprofit organization IPaintMyMind.

Transcendental retail isn’t just for the big brands, either. In Chicago, locally owned barbershop-esque boutique, Fat Tiger Workshop, is an instigator of community culture. It hosts workshops and collaborates with local artists, musicians, restaurateurs, creatives and designers. Its owner calls it ​“a vehicle for others to express their ideas and visions.” Charleston, SC store Sneaker FF has become HQ for the local creative community by hosting art shows, concerts, sneakerhead meet-ups and more. Owner and curator JP Hudson told us, ​“Zs see the future of retail as far more radical.” 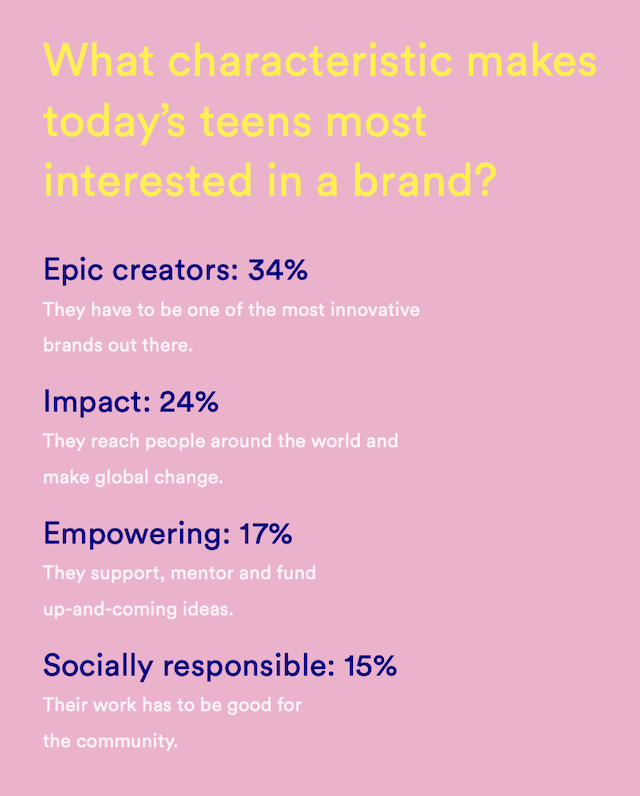 Retailers aren’t creating transcendental retail on their own. Having been raised on Kickstarter and YouTube tutorials, Gen Zs see their relationship with brands as communal. They aren’t passive consumers, but rather, active co-creators. Sure, it’s up to brands to create space for innovation, but consumer participation is key. The Samsung 837 space is dope, but it doesn’t truly come alive until creatives show up and activate it. The creativity fueling adidas makers labs wouldn’t turn heads if it weren’t for students blowing minds with what they create. Zs expect brands to collaborate and partner with them to support their desire to do epic shit. In turn, they’ll support brands in being epic, too.

It’s a bit like the feminist philosophy of Shine Theory, which posits: rather than be jealous of the most badass woman in the room, head straight for her and befriend her. Surrounding oneself with rad people (or brands) doesn’t make you look worse by comparison — it makes you better. Iron sharpens iron, after all. Case in point: topping the list of characteristics that Gen Zs want from brands is ​“being epic creators,” a call to arms for retailers everywhere to push innovation to its apex — and shine a spotlight on Zs’ creativity, as well.

Finally, while Gen Z teens are the most empowered generation yet, they’re still, well, teenagers. Many of the evergreen realities of adolescence remain true today: they can’t get into R‑rated films, they still need their parents to drive them to the mall, and, regardless of where or how they shop, their spending habits are still very much tied to their parents’ wallets.

So, while Zs may be craving mega-epic brain-busting transcendental retail experiences, their reality may be locking down the new Jordans wherever their parents will buy them. The majority of Zs take what they can get. 75% of teens say they want convenient and accessible products they can purchase today. Still, the future belongs to brands that are thinking beyond today’s sales. Brands that dare to create epic and, yes, Instagrammable experiences will claim the loyalty of a generation that, as it turns out, is up to co-create the future of retail right along with them. 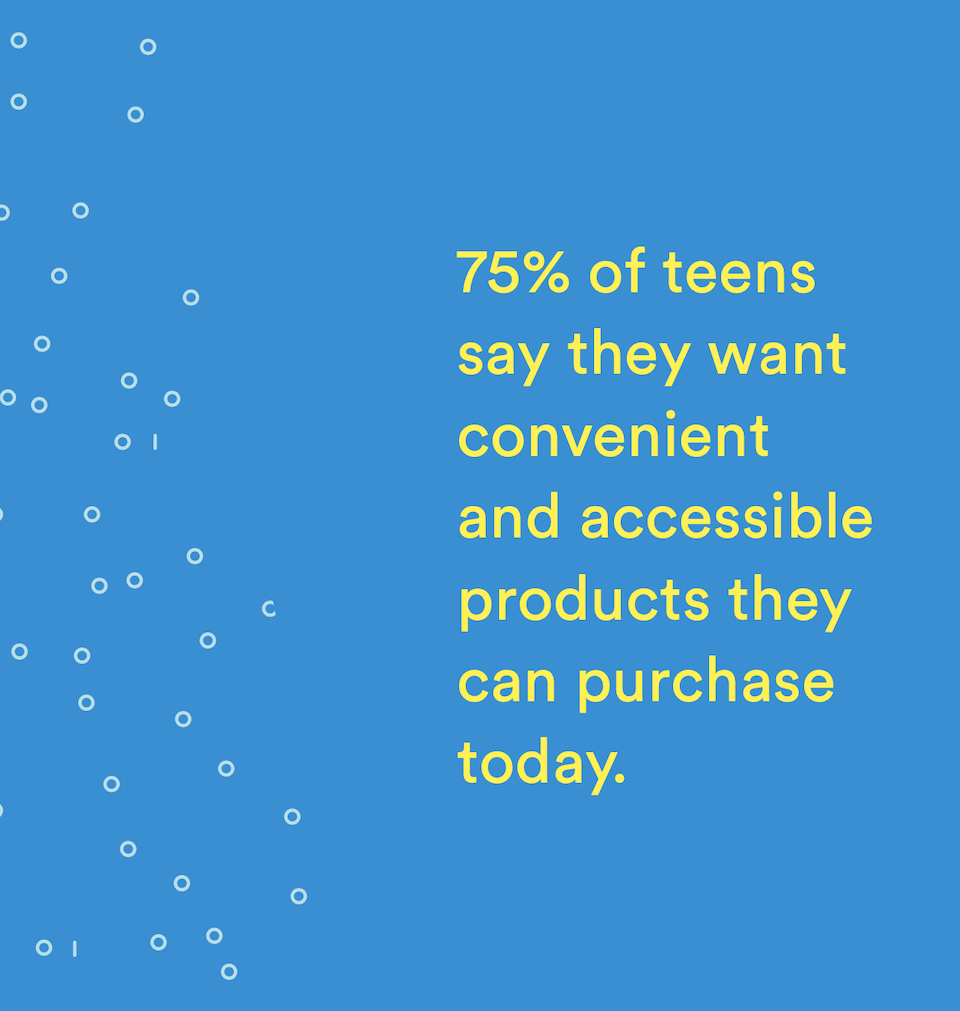